RESPIT, regionally-specific immunotherapy, is the practical allergy immunotherapy alternative that you can prescribe for atopic dermatitis in dogs and cats without allergy testing.  I recently conducted a survey of all 160 veterinarians who had prescribed RESPIT Injectable prior to September 30, 2012.  (That number is now over 500, but we wanted to hear from those that had had a chance to follow up patients for at least 9 months.)  I asked veterinarians to assess the efficacy and safety of RESPIT in each of their patients meeting certain inclusion criteria, and also asked some questions concerning their overall impression of RESPIT.  I am going to share the patient-specific information elsewhere, but here are the overall impression results from the 15 veterinarians who completed the survey. 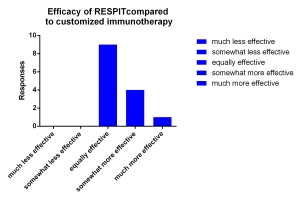 Jon Plant, DVM, is a Diplomate of the American College of Veterinary Dermatology, founder of SkinVet Clinic and developer of RESPIT, regionally-specific immunotheray for atopic dermatitis of dogs and cats. He is a member of the International Committee on Atopic Diseases of Animals, the past President of the Portland Veterinary Medical Association and the Dermatology Section Editor of the Journal of the American Animal Hospital Association.
View all posts by skinvet →
This entry was posted in Atopic Dermatitis, immunotherapy, RESPIT and tagged allergy test, ASIT, atopic dermatits, canine, dermatology, dog, regionally-specific immunotherapy, RESPIT, veterinary dermatology. Bookmark the permalink.
Loading Comments...
%d bloggers like this: