Apoquel safety: how Apoquel is like fine wine – Part 2

How much do we know about Apoquel’s safety? Quite a lot, I would argue. 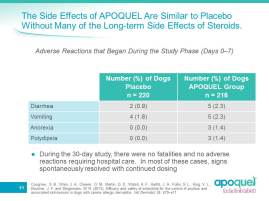 The short-term safety profile, based on the data collected during multiple randomized-controlled trials at recommended doses looks good.  In a 28-day study of 436 dogs , the prevalence of diarrhea, vomiting, anorexia, and polydipsia were low (1.4-2.3%) and similar to the placebo-treated group (0-1.8%).  In most cases, the signs resolved with continued dosing of Apoquel. Similar results were found in other RCTs.

An 84-day RCT comparing Apoquel to Atopica® (cyclosporine) in 226 dogs found that vomiting and diarrhea occurred with a greater frequency in the Atopica group (44 and 15%) than the Apoquel group (14 and 4%). I suspect that the higher rate of vomiting seen for Apoquel in this study compared to some other studies relates to its longer duration.  I have personally prescribed Apoquel for more than 50 dogs representing thousands of doses and have had very few clients contact our office regarding suspected adverse reactions.

So, if these clinical studies all sound good, why is there still concern amongst some about prescribing Apoquel? It stems from the target safety laboratory studies, often using 3 or 5 times the recommended dose, or giving it to young dogs, for which it is neither recommended nor approved. These are the studies that led to the recommended age restriction and dosing of a drug which admittedly represents a balancing act between the right amount and too much! Remember, Apoquel is like fine wine or anything else you are can overdo!

In the target safety studies, some of the concerning findings are dermatitis, interdigital furunculosis (apparently common in laboratory beagles), demodicosis (in 6-month old dogs), pneumonia (in young dogs treated with high doses), lymphadenopathy, decreased cellularity of other lymphoid tissue, and mild hematological effects.  Of the 4 dogs euthanized during the target animal safety studies, infection played a role in each.  Their Apoquel dosing for all of them was 6 to 12 times the recommended daily dosing and they all initiated treatment at less than 6 months of age.  Is this risk too great to use Apoquel?  I don’t think so. What if a pharmaceutical company was doing a similar target safety study as required by the FDA with prednisone, giving it at 6-12 times the recommended dose to young dogs for an extended period of time?  Wouldn’t you expect that we would see some immunosuppression related infections as well as other side effects?  Does that stop you from ever prescribing prednisone to alleviate a pet’s suffering? No, because you use the correct dose in practice!

Finally, what about the issue of neoplasia and cancer? It is thought that immunomodulating drugs can, in general, predispose patients (humans and dogs) to some forms of cancer, thus the FDA has certain labeling requirements concerning immunomodulating drugs. The Apoquel package insert carries a warning that Apoquel “may exacerbate neoplastic conditions.” There is no way to disprove this statement, so although no neoplasms were observed in the laboratory safety studies, and the causality of some of the tumors that developed in the field trials were ruled out based on a very short period of time between starting the drug and tumor diagnosis, the statement sticks. Here is the information available regarding the open-label, long-term continuation study (239 dogs) in the Freedom of Information Summary:

Ideally we would evaluate the prevalence of each diagnosis against a database of dogs with a comparator group with similar demographics.  But of course that isn’t readily available.  So we are left to consider whether the prevalence of neoplasia in these 239 dogs (5%) is unusually high. My local veterinary oncologist and I don’t find the prevalence unusual, although we don’t have all the demographic data that would help us evaluate it.

For the record, I do not have any financial conflicts of interest concerning Zoetis. I’m just a fan of Apoquel. For me, Apoquel is living up to expectations and I am very glad we can help out so many dogs. It needs to be used at recommended doses and under careful veterinary supervision. Let’s not forget how miserable it is to be itchy and how that negatively impacts quality of life and the human-animal bond!

In future posts I’ll discuss the patient monitoring that I recommend for Apoquel and how I incorporate it into my treatment with RESPIT to manage the underlying allergy.

Jon Plant, DVM, is a Diplomate of the American College of Veterinary Dermatology, founder of SkinVet Clinic and developer of RESPIT, regionally-specific immunotheray for atopic dermatitis of dogs and cats. He is a member of the International Committee on Atopic Diseases of Animals, the past President of the Portland Veterinary Medical Association and the Dermatology Section Editor of the Journal of the American Animal Hospital Association.
View all posts by skinvet →
This entry was posted in allergic dermatitis, apoquel, Atopic Dermatitis, Uncategorized and tagged allergic dermatitis, atopic dermatits, canine, dermatology, dog, pet, veterinary dermatology, veterinary medicine. Bookmark the permalink.

32 Responses to Apoquel safety: how Apoquel is like fine wine – Part 2