Zeroing in on canine atopic dermatitis

There have been a number of advances in canine atopic dermatitis treatment within the past few years, notably the introduction of the janus kinase inhibitor Apoquel (oclacitinib), manufactured by Zoetis. While the shortage has been aggravating, Apoquel has proven safe and effective for the treatment of canine atopic dermatitis. Recently, Zoetis has conditionally released a new product to veterinary dermatologists that adds to the therapeutic options for one of veterinary medicine’s most common disorders. Currently, the product is called “Canine Atopic Dermatitis Immunotherapeutic” or CADI. It’s a once monthly subcutaneous injection for atopic dermatitis related pruritus that grew from the research that brought us Apoquel. 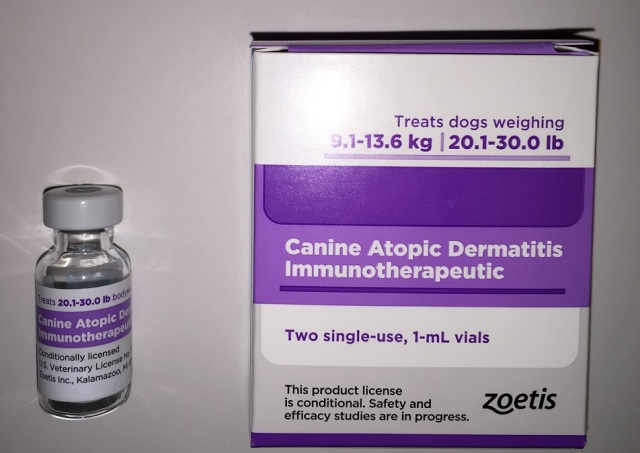 Interleukin-31 is a cytokine associated with pruritus and inflammatory cell infiltration into the skin in humans and dogs with atopic dermatitis.¹ IL-31 is produced by activated Th2 lymphocytes and when signaled, binds to a heterodimeric receptor causing initiation of a signal transduction cascade. One of the components of this cascade is the janus kinase system, which is inhibited by oclacitinib.

CADI is a canine monoclonal antibody that specifically targets IL-31, neutralizes it, and prevents binding of the receptor. This inhibits the entire cascade, which in turn decreases janus kinase–mediated itch. In essence, it works like oclacitinib, but earlier in the pathway and with more specificity. A single subcutaneous injection of CADI produces noticeable pruritus relief versus a placebo for up to 56 days.² Veterinary dermatologists are now exploring how CADI is accepted and incorporated into clinical practice. It’s not known when CADI will be more widely available. Hopefully, it will soon be another option veterinarians will have for managing canine atopic dermatitis.

Jon Plant, DVM, is a Diplomate of the American College of Veterinary Dermatology, founder of SkinVet Clinic and developer of RESPIT, regionally-specific immunotheray for atopic dermatitis of dogs and cats. He is a member of the International Committee on Atopic Diseases of Animals, the past President of the Portland Veterinary Medical Association and the Dermatology Section Editor of the Journal of the American Animal Hospital Association.
View all posts by skinvet →
This entry was posted in allergic dermatitis, Atopic Dermatitis and tagged anti-IL31 mab, canine atopic dermatitis immunotherapeutic, dermatology, dog, veterinary dermatology. Bookmark the permalink.

1 Response to Zeroing in on canine atopic dermatitis